Ahousaht First Nation is the most populous First Nation on the west coast of Vancouver Island, the largest Nuu-chah-nulth Nation. The Nation is a confederation of multiple former tribes: the Ahousaht, Manhousaht, Kelthsmaht, Piniit-thlaht, Qwaacwi-aht, O-inmitisaht, and Otsosaht. This joining began before the arrival of Europeans.

Band No.
Traditional Name: Ahousaht means people (aht) of Ahous, a small bay on the west side of Vargas Island.
Alternate Names: 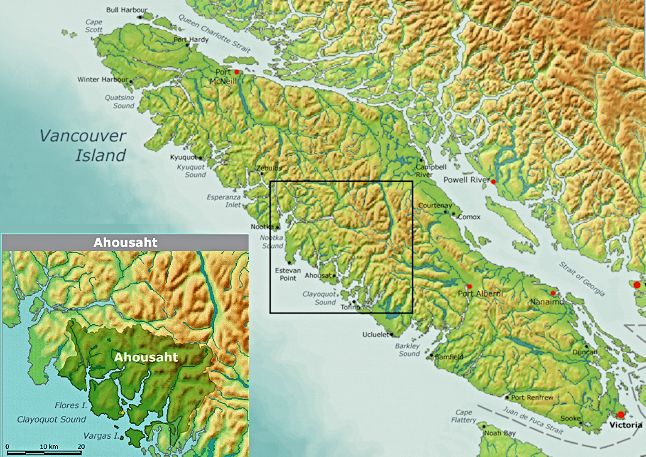 In addition to the governing body through the Hawiih, Ahousaht has a mandated body of elected officials. This is the Ahousaht Chief and Council.

The number of councillors is determined by the overall size of the population. For every 100 members of a nation, there is to be elected one council member, to a maximum of 12 members (as per the Indian act.). Elected Council’s role is to be accountable to this Indian Act.

Overall, both Ha’wiih and Chief and Council are ultimately there to represent the Ahousaht membership and honour their long history.

Ahousaht’s first Council was appointed by the Ha’wiih rather than elected by the membership, sometime in the early 1950s. The late Paul Sam, (Stanley Sam’s father), was the first Chief Councillor.

They eventually went to the elected system, as dictated by the Indian Act. Coincidentally or not, it has since been down hill in many ways — economically, socially and culturally, as they struggle with two systems of governance. 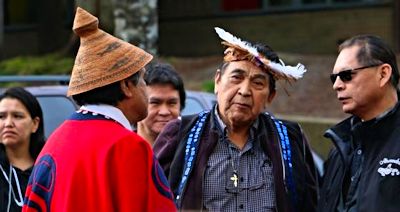 Work has been done to bridge the gap between the two systems by both the elected and the hereditary leaders, with both sides quite interested in supporting and supplementing each other’s goals and objectives.

The Councillors and the Chief Councillor were usually elected on two-year terms; however, due to a court decision (Courbier decision) this has caused changes to be made, and Ahousaht are adopting a new process for holding elections.

One significant change will be the change from two to four year terms for council to sit. Another important change is the inclusion of all members of the nation in the voting process.

Previously, only those living ‘on-reserve'(I.R15 – Marktosis reserve) were allowed to participate in this voting process. Council is responsible for appointments to other boards on behalf of the Ha’wiih.

The Ahousaht have a dynamic administrative group working on all facets of Ahousaht cultural, health, economic, and treaty-related issues.

Reserve No. 15
Name: Marktosis Indian Reserve
“Marktosis” is an English-style adaptation of Maaqtisiis in the Nuu-chah-nulth language.

Marktosis is the only one of 25 Ahousaht reserves occupied year-round. Others are traditional fishing stations and areas of seasonal resource extraction, considered uninhabitable for year-round settlement.

Many of these reserves, designated by the government of the day, tended to mark the general areas that were inhabited by the various members of the nation at the time of contact. It is only after contact that the bulk of members came to live on Marktosis.

The reserves of Ahousaht, and of neighboring coastal nations, are relatively small in size to the numbers of the population.

It is believed that the reserve designations were tiny because the members of the Ahousaht nation, at the time of contact, relied very heavily on Oceanic resources as a main staple of dietary and other needs.

The ocean was considered to be “the garden” of the people; hence, it was presumed that little land-base was needed to fulfill the ongoing needs of the people.

All Ahousaht reserves are accessible only by boat or floatplane.  The village of Maaqutusiis is located on Flores Island and is the primary home of the people of Ahousaht. It has a large community hall, a gym, a youth center, a restaurant, a health center and a school for children K-12.

The main economic activities in the Ahousaht community are tourism, finfish aquaculture, forestry and fishing, including shellfish. The latter two have declined in recent years.

Members are employed seasonally in silviculture (the growing and cultivation of trees), water taxi transport, construction, tourism, forestry and aquaculture.

There are five enterprises operated by Ahousaht Administration, including natural resources, tourism, grocery and transport ventures, as well as a minimum of 13 to 15 Ahousaht member-owned businesses in the region.

These include restaurants, a gallery, tour companies, water taxis, contractors and professional services.

Opportunities for farming indigenous species (e.g., Chinook) are being examined. The aquaculture industry provides 60 to 70 jobs annually for the Nation. ]

A very important note of merit goes to Albert Frank Sr. of Ahousaht. In 2009, he became the top performer for all of Mainstream’s operations (in fish husbandry) worldwide, raising the bar and proving the worth of local knowledge in finfish aquaculture operations.

Iisaak Forest Resources (IFR) is a forestry company purchased in recent years by a group of nations in the Clayoquot Sound area. Formerly, they were known as the ‘Central Region Group’ of first nations; however, the structure of the Nuu-chah-nulth has changed from the three regional groups into one large group again.

Government transfers make up 24 percent of total income for persons 15 years and over (contrasted against 13 percent in Ucluelet and eight percent in Tofino).

In 2003-04 Weyerhauser transferred two parcels of land adjacent to the existing reserve for community expansion. Plans are underway for a five-year development on District Lot 363 and 363A. The new development is designed to include approximately 200 new homes, an artist’s village, cultural centre, new high school and economic development facilities.

Ahousaht is always in talks with Business groups, government, and other individuals to seek out every possible economic venture that they can. John O. Frank (Chief Councillor) is a good person to contact about such opportunities.

Despite census figures of 13 to 14 percent unemployment, locals report much higher rates. Chronically high unemployment and the large young population about to or recently entered into the workforce create significant pressure for job creation, education and training.

Of residents 15 years and over 19 percent have less than a Grade 9 education, 56 percent Grade 9–13, 19 percent trade or other non-university and 6 percent university.

Social and health issues continue to provide significant challenges for this remote community and impact work-readiness. There are also several problems with community infrastructure. 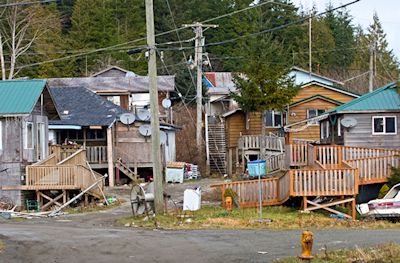 Housing is in a crisis on the reserve where mold continues to be a problem.The small, isolated reserve of Ahousaht is surrounded by the ocean and mountains. Housing shortage is a significant issue and a recent study indicated there are 136 dwellings in moderate to poor condition.

Further, almost half of the existing reserve (I.R15) is inaccessible to housing or other social development due to poor initial planning of the infrastructure layout. The community’s dumpsite is just above the middle marker of the reserve, and makes expansion of housing into the northern portion of the reserve impossible due to health and safety regulations.

Solid and sewage waste management is insufficient and the power supply via underwater lines is projected to last for another five to ten years.

The Ha’wiih (Hereditary Chief) role in the Ahousat governing system is to look after their Ha- Ha’houlthee (territory and resources). The Ha’wiih system is still alive among Ahousat people. It is the most important part of their history.

Laws, under the Ha’wiih system, outline chieftainships and governance. The keepers of these laws are the Wit-wok.

No Ha’wilth (Hereditary Chief) is above the law. Every Hereditary Chief has advisors. No Chief can make his own decision. A Council (not the elected council, per se; rather, it is the people who are responsible to be an advisory to the chief) is depended upon for good, solid advice, before any decision is made for Ahousaht.

No Ha’wilth speaks for himself, unless he has good news, or something good to share. All Ha’wiih have speakers, who are trained, from an early age, for these duties. Speakers must be fluent in their language and have a very strong knowledge of the history of the Ha’wilth seat (including lineage) and his Ha’houlthee.

There are misconceptions about the Ha’wiih system being similar to fiefdoms, but people must understand that it is a much more inter-connected system of governance with numerous accountability mechanisms.

No Ha’wiith can hold tremendous power without the support of a number of people who are the bearers of customary laws. Each Ha’wiith holds a Ha’houlthee that includes land, sea, resources and people within his territory, which had clearly defined boundaries and people who watched over the boundaries between nations.

They have stories in their history, which tell of how important these boundaries are and how they were protected.

Ha’wiih have the power to create Dik-qo-wilth Seat (a similar position could be the one of “noble”). A person is given their own smaller portion of the territory to own and care for in return for great service to the nation and the chief.

Ahousaht history tells of two, which were created by their Ha’wilth to recognize the constant support provided by these two individuals. Their importance was such that, at a potlatch, they were recognized before the Ha’wilth when a Ha’wilth dance was performed.

The Ahousaht have an oral history, which goes back 17 or 18 generations, telling  of all of their  Ha’wiih, and it includes when one hereditary position became three.

Each Ha’wilth heads up a house and each house has a name. Maquinna is the Tyee (the head-ranked Ha’wilth of Ahousaht). As a collective, all three Ha’wiih comprise the principal Hereditary Chiefs of Ahousaht. Currently these individuals are:

The Oo-in-mitis seat is currently vacant.

An appointee held the important role of welcoming visitors. In the case of Ahousaht, Hi-yupin-ulth (Bill Keitlah, Jr.) currently serves that role as a Ha’ilth.

In the case of Kelthsmaht, the beach keeper (welcoming person) was appointed or had a Dik-o-wilth. He is Kanupiit (Rocky Titian).

When Uu-qua-qruum (Corbett George) encountered some difficulty in his life Earl George took the seat back and just prior to his passing, he named Maquinna (Lewis George) as his successor at Hupacasath.

In November 2007, Maquinna (Lewis George) held a major potlatch to declare his seat.

A great strength that Ahousaht is known for is its rich tradition of song and dance. The young men, led by Joseph George Sr. offer a thunderous voice for the nation when performing their art.

A new group, the Soulshakers has become widely known for not only continuing to share their history of song, but also for composing new and exciting songs/dances to share with family, friends and with any who is there to see.

Recently, Ahousaht challenged the ownership of land by the Catholic Church to the land that had housed Kakawis Family Development Centre.

This land had served as a treatment centre for many people, including members of Ahousaht; now, however, it is no longer used for such work.

As such, the Ahousaht do not wish to see this land transferred into other private hands, as this land was never seceded to the church, or to the government.