The Caldwell First Nation land base is located in Leamington, Ontario, Canada. They are an Anishinaabe group, whose members are originally of the Mikinaak (Turtle) and the Makwa (Bear) dodems.


Band No. 165
Traditional Name:
Alternate Names: Chippewas of Pelee, Point Pelee Indians, Pelee Island,  and Caldwell’s band of Indians.
Related Tribes: The Chippewa (also called Ojibwa in Canada) are an Anishinaabe-speaking indigenous nation with people within the borders of present-day Canada and the United States. The Anishinaabe are the largest Native American/First Nation peoples north of Mexico, with nearly 78,000 people among various groups in Canada from western Quebec to British Columbia. 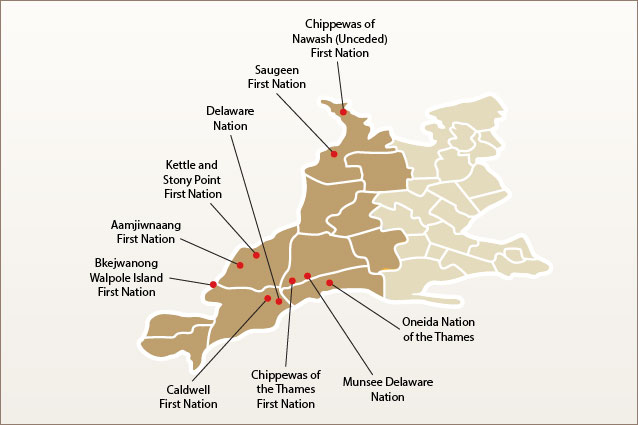 The Caldwell First Nation has lived  in the Point Pelee area from before 1763. Their traditional territory encompassed a broad area all over the Ontario region, in particular the areas extending from the Detroit River along Amherstburg all the way to Long Point Ontario and the Lake Erie Islands. The heart of their ancestral territory includes the areas of Essex and Kent county area, in particular the Point Pelee Peninsula and Pelee Island.

In May 1790, representatives of certain Ottawa (Odawa), Chippewa (Ojibwa), Pottawatomi (Bodéwadmi) people and the Huron (Wendat) surrendered a large tract of land in southwestern Ontario, including Point Pelee. The Caldwell First Nation neither signed nor benefited from that treaty.

However, the Crown did not realize this and it was publicly acknowledged by the Department of Indian and Northern Affairs Canada. Caldwell First Nation Council members settled the land claim that had been outstanding for more than 220 years.

The Caldwell First Nation is the only federally recognized Indian band in southern Ontario without a reserve land of its own. The Nation is working towards establishing a reserve, which will finally give members a land base.

The Caldwell First Nation served as allies of the British during the War of 1812. In consideration of this service, they were promised land at Point Pelee. The First Nation continued to occupy Point Pelee, with the support of the Canadian government, up until the late 1850s.

In the 1920s, many of the band members were forced out of Point Pelee when the Royal Canadian Mounted Police along with local law enforcement agencies burned the homes of band members in the area in an effort to force them from their traditional lands.