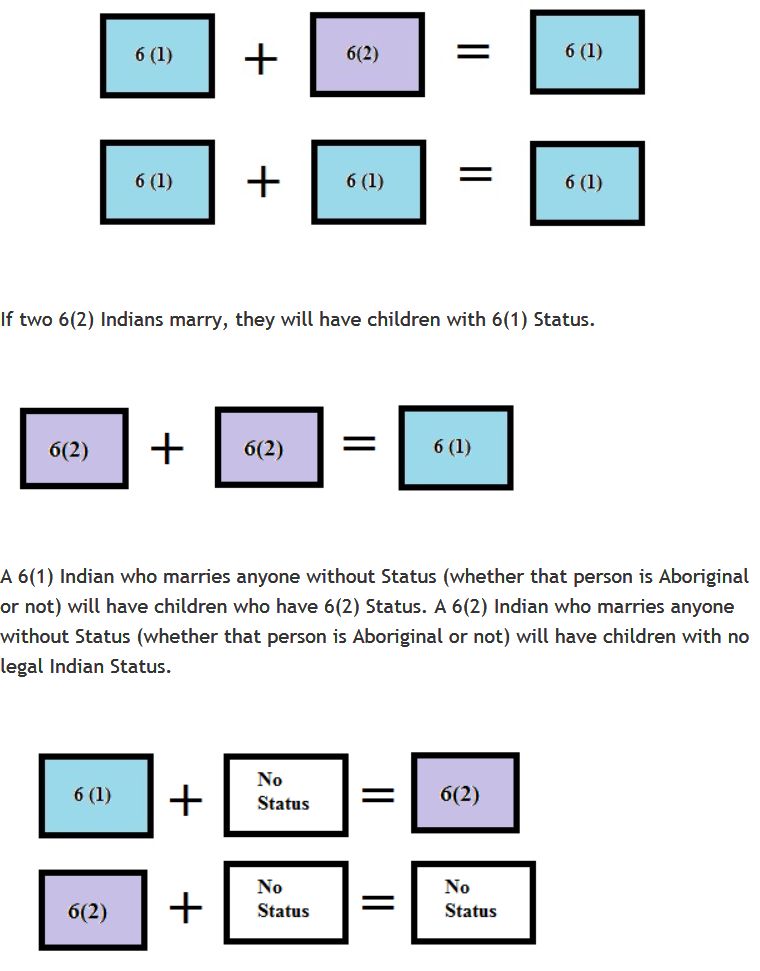 Look at this chart again. Two generations of ‘out-marriage’. That is all it takes to completely lose Status. It does not matter if you raise your grandchildren in your native culture. It does not matter if they speak your language and know your customs. If you married someone without Status, and your grandchildren have a non-Status parent, your grandchildren are not considered Indian any longer. Not legally.To be honest, it is amazing there are any Status Indians left in Canada.One of the most criticised aspects of Bill C-31 was that it did not actually reverse the sexism inherent in denying women Status if they married a non-Status man.Women who had their Indian Status reinstated under Bill C-31 had 6(1) Status, but their children had 6(2) Status. That makes sense according to the charts above, right?The problem is that men who married non-Indian women actually passed on Indian Status to their previously non-Status wives. Thus the children of those unions have 6(1) status.Sharon McIvor launched an epic court battle to address the problems with Bill C-31 and the Indian Act. In response a Bill was introduced to Parliament for First Reading in March of 2010. The full title of this Bill is:An Act to promote gender equity in Indian registration by responding to the Court of Appeal for British Columbia decision in McIvor v. Canada (Registrar of Indian and Northern Affairs)Bill C-3, as this bill is commonly referred to, was given Royal Assent on December 15, 2010 and became law on January 31, 2011. A great many grandchildren of women who regained Status under Bill C-31 (but who passed on only 6(2) Status to their children) can now regain their 6(2) Status if they choose to.It is not an easy choice to make. Identity politics are incredibly convoluted and mined with danger. For others who have ‘lived’ Indian their whole lives, Status be damned, it can be an important change…but ultimately one that reinforces the so-called legitimacy of a colonial power deciding who is Indian and who is not.Another sub-category you should know about has to do with whether or not someone is a Treaty Indian or a Non-Treaty Indian.Treaties in this context refer to formal agreements between legal Indians or their ancestors and the Federal government, usually involving land surrenders. The so called ‘numbered Treaties’ were signed between 1875 and 1921 and cover most of western and northern Canada. British Columbia, with the exception of Vancouver Island is not covered by any historical Treaty.Other Treaties were signed in eastern Canada, but there are vast areas in the east that are still not covered by any Treaty. A number of modern (since 1976) Treaties have been signed in BC, and in other areas of the country, and negotiations are still underway to create more Treaties. Some Treaties provided for reserves and others did not.There are many non-Status Indians, particularly in eastern Canada, who consider themselves Treaty Indians.  In the Prairies, “Treaty Indian” is often used interchangeably with “Status Indian” although one is not always the same as the other.

To sum up, Status is held only by Indians who are defined as such under the Indian Act. Inuit and Métis do not have Status, nor do non-Status Indians. There are many categories of Status Indians, but these are legal terms only, and tell us what specific rights a native person has under the legislation.If a native person is not a Status Indian, this does not mean that he or she is not legally Aboriginal. More importantly, not having Status does not mean someone is not native. Native peoples will continue to exist and flourish whether or not we are recognised legally and you can bet on the fact that terms and definitions will continue to evolve.

This chart is a guide to the pronunciation of British Columbia First Nations.