Kenojuak (Ashevak) is generally regarded as Canada’s foremost Inuit artist. Since her first print appeared in a 1959 collection, she has established an international reputation; her work has been featured in exhibitions throughout Canada, the United States, and Europe. 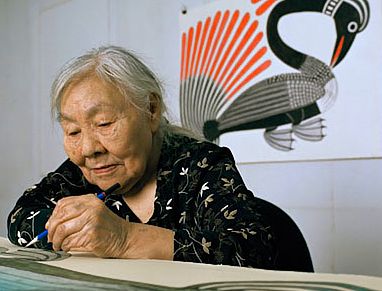 Although most widely renowned for her prints, two of which have appeared on Canadian postage stamps, Kenojuak has worked in a variety of two- and three-dimensional media, including sewing, sculptures, copperplate engravings, paintings and drawings. She was among the first group of Canadians to receive the prestigious Order Canada Medal of Service, an award honoring achievements in all fields of Canadian life.

Elected into the Royal Canadian Academy in 1974, Kenojuak has also been awarded numerous commissions, including the mural for the 1970 World’s Fair.

On October 3, 1927, in south Baffin Island, Northwest Territory, Ushuakjuk, an Inuit hunter and fur trader, and his wife Seelaki named their newborn daughter Kenojuak, after the infant’s deceased maternal grandfather. By participating in this Inuit naming tradition, the parents believed that all of the love and respect that had been given to the deceased during his lifetime would now be bestowed upon their daughter.

Although remembered by Kenojuak as a kind and benevolent man, her father caused conflict within the Ikerrasak camp and was murdered by its other members in 1933. After his death, Kenojuak went to live with her grandmother, Koweesa, who taught her the sewing skills that would resurface in her first works of art years later. While learning to repair sealskins being readied for trade at the Hudson’s Bay Company, Kenojuak also devoted many of her childhood hours to chasing small birds, which would later serve as the subjects for many of her prints.

When Kenojuak was 19, her mother and stepfather, Takpaugni, arranged for her to marry Johnniebeo, a local Inuit hunter. A spirited woman, Kenojuak initially resisted the marriage, throwing rocks at her new husband whenever he approached her.

In time, however, she came to regard him as a kind, gentle man, whom she loved a great deal. Years later, he developed his own artistic talents and sometimes collaborated with his wife on large projects.

During the first few years of her marriage, Kenojuak gave birth to three children: two daughters, Jamasie and Mary, who died in childhood of food poisoning, and a son, Qiqituk, whom another family adopted at birth-a common Inuit custom.

In 1950, the first nurse arrived n the North, providing the Inuit people with their first access to the modern medical care. After testing positive for tuberculosis, Kenojuak was sent to the Parc Savard Hospital in Quebec City, where she stayed from early 1952 to the summer of 1955, narrowly escaping death several times. 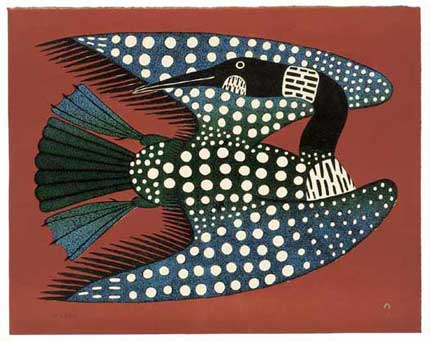 While recovering, she learned to make dolls and do beadwork in the hospital crafts program; her work caught the attention of James Houston, an early promoter of Eskimo art.

Upon returning to her family, Kenojuak officially launched her career as an artist, selling her sealskin and beaded crafts through a program started by Houston’s wife, Alma. She also began carving, selling her work primarily through the Hudson’s Bay Company.

At the encouragement of Houston, who provided her with supplies, she tried her hand at drawing. After destroying her first effort, she gained enough confidence in her abilities to show her drawings to the promoter, who praised her work and urged her to continue.

In 1958 her first print, Rabbit Eating Seaweed, was produced from a design on one of her sealskin bags at a Cape Dorset print shop. Shortly thereafter, several of her original drawings were reproduced as prints, making her work accessible to a wider audience.

Encouraged by the income their art work might generate, Kenojuak and several other Inuit of Cape Dorset, under Houston’s guidance, formed the West Baffin Eskimo Cooperative in 1959. The organization, in which the Inuit could purchase shares, served as a senlavik-“a place where one works”-for aspiring Inuit artists.

Several of the early drawings, including a stencil by Kenojuak, were collected that same year and displayed in an exhibit in Stratford, Ontario. Viewing the Eskimo art for the first time, the southern audience responded favorably, providing the artists of West Baffin with an incentive to continue their work.

By 1962, Kenojuak’s art had gained enough recognition to be featured in a National Film Board production, Eskimo Artist-Kenojuak, which showed the artist at work and provided a detailed account of the printmaking process. The documentary, which took three months to film, also attempted to show Kenojuak and her family participating in the traditional ways of Eskimo life.

While the film-making process was tiresome and artificial, the money she earned from it enabled Jonniebo to purchase his own canoe and achieve his independence as a hunter. This was an added benefit to the family, which by this time had added a daughter, Aggeo, and an adopted son, Ashevak.

Kenojuak’s financial success, however, was not always admired within her own community. The fact that she was a woman in her early thirties earning significantly more money than anyone in the camp angered many of the men, but it did not prevent her from continuing her work. 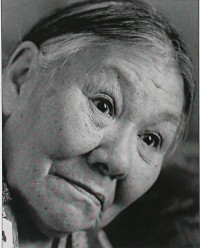 As more of her prints were released to the public in subsequent Cape Doreset print collections, Kenojuak’s fame spread throughout Canada. In 1967 she was honored with the Order of Canada Medal of Service form Governor General Roland Michener and had her work featured in the National Gallery of Canada.

Three years later, her famous work The Enchanted Owl was reproduced on a six-cent Canadian postage stamp. Full-size printed versions of the work would sell for as much as $14,500 several years later, further demonstrating the strength of her reputation.

With the help of Jonniebo, she painted a mural for the 1970 World’s Fair in Osaka, Japan. By 1972, two years after her husband’s death, she had been selected for membership in the Royal Canadian Academy and her work had been exhibited in several European countries, as well as throughout Canada and the United States.

Despite her considerable fame, Kenojuak has never thought of herself exclusively as an artist, but rather has considered her artistic career to be only one facet of her life.

“I don’t put any aspects of my experience first as the main thing,” she stated in Jean Blodgett’s Kenojuak, a book-length study of her work. 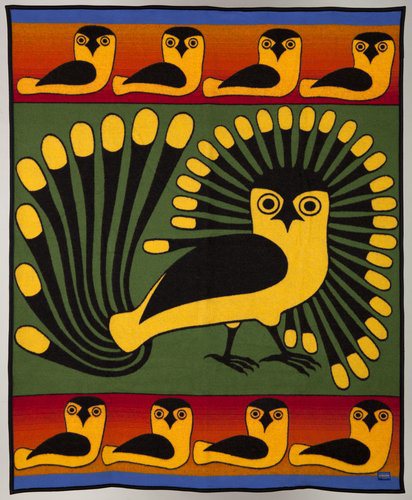 Kenojuak’s unwillingness to view herself primarily as an artist is consistent with the traditional Inuit culture; living conditions demanded that men and women develop competence in a wide range of skills in order to survive. What is conventionally considered to be a work of art is valued by the Eskimo people primarily for its usefulness: as a ritual item, as a piece of clothing, or as a source of income.

As Kenojuak told Blodgett, “The main reason why I create things is because of my children, my family.”

While Kenojuak has placed her work within the Inuit tradition of functional art to some degree, she has also expressed the desire to simply create something beautiful. As told Blodgett, “I try to make things which satisfy my eye, which satisfy my sense of form and color.”

Consequently, the subject matter of Kenojuak’s work seldom reflects any mythological meaning or portrays scenes form Inuit life. She chooses her subjects instead for their inherent beauty and their adaptability to the print medium.

As Charlotte Townsend Gualt concluded in Macleans’s, “She is voicing the Inuit tradition in which making and decorating things is simply a part of daily life, and at the same time putting herself in the Western tradition of ‘art for art’s sake.'”

With these two artistic approaches combined in her work, Kenojuak has created an original style that many have sought to duplicate. What has continued to set her work apart from her imitators, however, is her continual experimentation with form and color. While working within the familiar Inuit patterns of birds and animals, Kenojuak has developed unique systems of colors by adding, superimposing, altering, and embellishing designs. According to critics, experimentation like this is what makes he work unique.

Although Kenojuak has achieved more financial success than any Inuit artist before her, she has remained firmly within the culture of the Inuit people. While she has replaced her traditional igloo with a modern frame house, she has not given up her love for the outdoors; she still travels with her third husband, Joanassie Igiu, and six children to some of her old campsite areas to hunt and fish during the summer, living off the land as she did as a child.

While family obligations have limited the amount of time she devotes to her work, she has not given up drawing and carving. “I continue to do so primarily for the future these works of art will guarantee for my children,” she noted in Kenojuak. “When I’m dead, I am sure there will still be people discussing my art”.