Living along the banks of the Fraser River in southwestern British Columbia, the Nlaka’pamux people of Spuzzum have had a long history of contact with non-Aboriginal peoples.In 1808 they hosted Simon Fraser as an overnight guest. Later they watched as fur traders searched for transport routes through the mountains of the Fraser Canyon, and saw miners, settlers, and merchants flood into their country during and after the gold rush. Since then, the Nlaka’pamux have found themselves in the path of the Cariboo Road, the Canadian Pacific Railway, and virtually every other commercial and province-building initiative undertaken in the region. 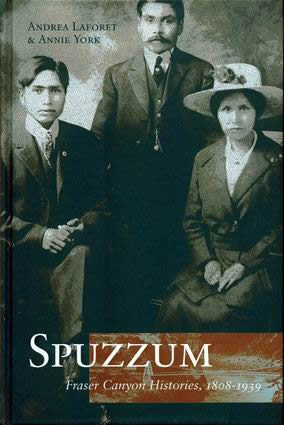 Fraser Canyon Histories, 1808-1939
Spuzzum is about the response of an Aboriginal community to events beginning with Simon Fraser’s visit in 1808 and ending with the Second World War. Based on a long collaboration between ethnologist Andrea Laforet and the late Annie York, a Nlaka’pamux resident of Spuzzum, this book gives voice and shape to the people who created, and re-created, the life of this community during this time. Encounters between Spuzzum people and Europeans are explored through narratives, personal memories, and family albums of Spuzzum people, as well as through missionaries’ journals, explorers’ accounts, and other archival records. In the final chapter Andrea Laforet examines both Nlaka’pamux and European ways of knowing the past in the context of current literature from anthropology, history, and ethnohistory.

In the wake of the decisions in the Delgamuukw case, the construction and interpretation of the past in both Aboriginal and non-Aboriginal societies has become an issue of vital importance. In examining the history of the community in this light, Spuzzum makes a significant original contribution to the study of First Nations history and ethnohistory.

Annie York (1904-91) was born in Spuzzum and lived there most of her adult life, sharing her knowledge of Nlaka’pamux culture, language, and history with Aboriginal and non-Aboriginal students in various fields.